At the time, I was obsessed with all things soccer. When I wasn’t playing or watching the game, I would join forces with my brother to make little booklets in which we’d list all the teams we knew and divide them up by country. Next to each team’s name we’d draw in their home and away jerseys, even adding a third kit if they had one and we knew what it looked like. That’s how my brother and I learned about different teams from around the world, and that’s also where we got our first lessons in geography.

The Mothe brothers in 1993. Shorter shorts and simpler times.

But let’s be honest, it was always really about the soccer. During those simpler years, soccer was all I thought about, which is why, whenever I had a chance, I would leave the house wearing my short shorts, an oversized (and fake) jersey, and a pair of plain white socks that I would pull over my nubby little knees. It was clearly an act of social suicide, but quite honestly, I could care less.

Come Christmas, this obsession with the beautiful game would manifest itself in a particular way. Every year in the lead up to Dec. 25th, I’d write long lists of jerseys I wanted to get from Santa. I’d number the lists, prioritizing my desires: in 1994, my top pick was the blue jersey from Italian side, Sampdoria; in 1995 I put the Argentina goalkeeper jersey at the top of the list.

Back then I didn’t know that my mom and dad were Santa’s primary financiers, and that my list was a financial impossibility for them. I also ignored the fact that it was highly unlikely that they would be able to find away jerseys from obscure West African teams in a pre-Internet South American city. So, I’d never get the jerseys I asked for, and the few jerseys I did get were always cheap knock offs that my dad would pick up in Bolivian-owned shops in the periphery of Buenos Aires.

This ritual continued until my eighth Christmas. By 1997 I had figured out that Santa wasn’t real. Realizing that my parents were the ones footing the bill for my presents meant that I no longer wrote lists of desired jerseys that swelled into the double-digits. But this realization did not mean that my obsession with soccer jerseys had come to an end. If anything, it had gotten stronger, which is why, that year, in order to maximize my chances of getting the jersey I really wanted, I decided to only ask my parents for one.

The choice was simple: for the 97-98 season, Newell’s Old Boys – a team from the Argentine city of Rosario – had launched a jersey that had blown my mind from the second I’d seen it. I wasn’t even a Newell’s fan, but that didn’t matter: that year, Adidas had modified the team’s traditional half-red, half-black jersey design, and the result was an oh-so-very-‘90s checkered mess that I absolutely loved.

“I don’t want anything else!” I told my parents that year. “Please, please, please get me that jersey!” 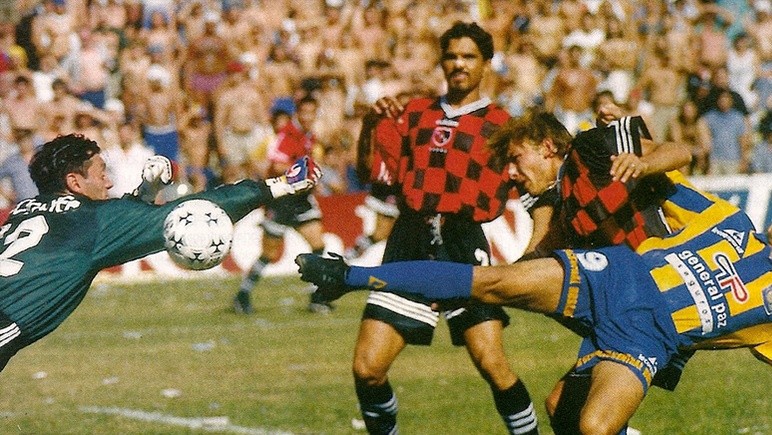 At this point of the story, dear reader, I’m going to ask you to put yourself in my little 8-year-old shoes, and take a second to imagine the heartbreak I felt on that Christmas morning in 1997 when the Newell’s jersey was nowhere to be found. I sobbed for hours, impervious to the fact that, standing proudly under the tree was a much more meaningful gift: a new family computer equipped with a CD-ROM player, which was cutting edge technology for Argentina in ’97.

Over 19 years have passed since that morning, but I still have vivid memories of the sense of loss that overcame me when I didn’t find the jersey under the Christmas tree. To this day, I have yet to fill the checkered-jersey-shaped hole in my heart, and while it’s true that I soon came to love the computer my parents gave me, when I look back at that morning, I can’t help but think it marked me in an unintended way: it was the first time I truly felt disappointed about anything.

And obviously, it wasn’t the last.

Disappointment—as I suspect it does with everyone—has been a part of my life from that day on, expanding and contracting depending on the occasion, and shaping my life in ways that are hard to imagine. On a few occasions, I know for a fact that it has paralyzed me with grief; but mostly, I think disappointment has propelled me forward, pushing me to try new ways in which to heal the wounds of time.

Perhaps this sudden realization—that disappointment can push me forward as much as it can hold me back—is why I’ve decided that this year I will embark on a quixotic journey to get a hold of that shirt and fill the jersey-shaped hole that’s been in my life for the last two decades. I don’t know if I’ll succeed or not, but I suspect that by taking a step towards healing that small and metaphorical wound, I’ll also be taking one step closer towards simpler times, in which soccer and jerseys were all that really mattered.