On Jan. 27, 2017, Donald Trump signed an executive order banning anyone from Syria, Iran, Sudan, Libya, Somalia, Yemen and Iraq from entering the United States for 90 days. While a court order has temporarily lifted the ban, people from those seven countries have heard Trump’s message loud and clear, and are convinced of one thing: they are no longer welcome in the United States.

This profile is part of an ongoing series that examines the lives of those people banned from entering the United States by Trump’s executive order. The stories are unapologetically political; a small act of resistance against the absurdity of life in the Trump era.

Part I. The Iraqi journalist

I WASN’T THERE WHEN THIS HAPPENED, but those who were tell the story like this:

“The plastic chairs were set up in a big circle, and it was hot, very hot. Everyone was seated: the full production team plus six or seven Chileans. They were all HIV positive, and they wanted to know why we were so interested in telling their stories. They also wanted to see if they could trust us.
We went around the circle and introduced ourselves and told them why we thought it was important for the world to know that HIV was spreading in this forgotten corner of the world. We spoke in English and our local producer translated.
Our explanations must have been good, because when we finished, they looked at each other and immediately started sharing their stories. They spoke in Spanish. Our fixer translated.
As we went around the circle, the stories got tougher and tougher. One young man seemed to have a particularly hard one. As he told it, his voice started to break up. By the end he was crying inconsolably.
We had no idea what he was saying, and none of us knew what to do. Except for Ahmed. He was sitting next to the young man, and while the man cried, Ahmed gently put his hand on his shoulder, and signaled to him, with a very small gesture that moved the whole room, that he wasn’t alone after all.”

It was the typical kind of thing that a person you wouldn’t want anywhere near your country would do in that sort of circumstance.

AHMED NAJDAT WASN’T SURPRISED by Donald Trump’s decision to ban the entrance of all Iraqis into the United States. It felt to him like an impending inevitability, just one more of the many injustices he’s been destined to face.

“Bro, I’m Iraqi!” he wrote to me on Whatsapp with a certain degree of humour. “We grew up dealing with shit like this.”

His answer caught me off guard, but Ahmed was right. Ever since he was born in Baghdad on a bright summer day in 1989, his life has been shaped by decisions made in Washington.

First came the Gulf War, then the sanctions, then the air strikes that rocked Baghdad in 1997. By the time Ahmed was 9, these things had combined to cripple the Iraqi economy to the point of no return. That’s when his parents—his dad, an engineer; his mom, a biologist—began looking for options to leave the country.

Thus began an exile that lasts to this day, and that has taken the family from Baghdad to Malaysia, then to Dubai, and finally to London, Ontario.

It’s been a tough journey, Ahmed tells me, which got even tougher in 2003 when Washington decided to deliver the country its final blow: the poorly-named Operation Iraqi Freedom. The descent into chaos and destruction that followed the invasion was swift, and the distance made Ahmed feel helpless.

“It’s just weird how the world works. They came to Iraq and messed up the country in so many different ways and basically forced so many of us to leave, and now they tell us, ‘oh, no, YOU don’t get in’? That’s fucked up to me.”

And I finally understood the twisted irony lying at the heart of Trump’s ban. 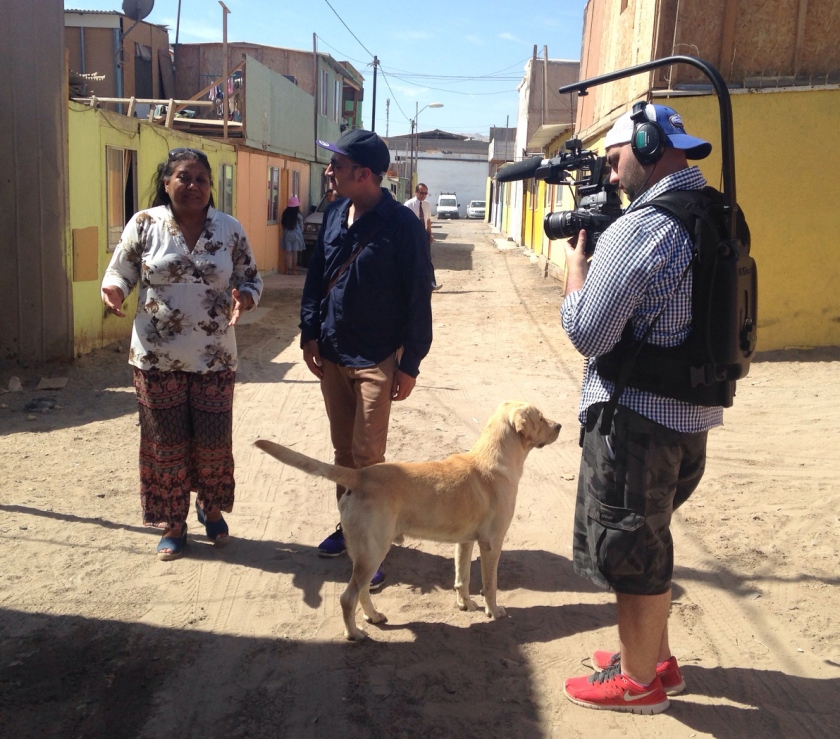 Ahmed in Antofagasta, Chile during a shoot with VICE News. Today Ahmed is working as a multimedia producer for Sky News in Abu Dhabi.

IN THE TWO WEEKS THAT PASSED since Jan. 27 – the day Trump signed the executive order banning anyone from Iraq, Iran, Syria, Yemen, Libya, Sudan and Somalia from entering the US for 120 days – and the second time I talked to Ahmed, a lot had changed: a federal court had deemed the ban illegal, Ahmed had moved from Canada to Abu Dhabi to work as a producer for Sky News, and he was no longer able to laugh off the ban as if it were business as usual.

“At first the whole thing was surreal and it didn’t really hit me,” Ahmed tells me over Skype from a hotel room in Abu Dhabi. “I thought ‘OK, you’re banning me, then fine, I just won’t go to the US.’ But then when you think about it and you talk to other people you realize that this is just messed up.”

The thing that made Ahmed change his mind was a conversation he had with his younger brother, a medical student who’s supposed to complete his residency in either New York or Chicago. They spoke on the day after the executive order was signed, and only then did Ahmed begin to understand the full effects of the ban.

“I say fuck it for me. I don’t need to go, but I know my brother will be affected,” he says. “And not just him: every Iraqi knows someone who will suffer because of this somehow.”

Should the ban stick, it will be yet another example of how decisions made in the White House impact the lives of Iraqis: families will be separated, people will be forced to leave their homes, and life plans will be dramatically altered. People whose lives have already been upended for decades by American policy will have to deal with their aftermath once more.

“It’s crazy to me that after everything that’s happened, after all they’ve made us go through, this guy had the audacity to say, because you’re from there, you can’t come here,” Ahmed says, no hint of humour in his voice this time. “It’s just so blatantly racist.”

TECHNICALLY, there’s a chance that Ahmed could enter the US even if the ban overcomes the judicial challenges it is currently facing. That’s because since 2014, he’s held dual Iraqi and Canadian citizenships, and his Canadian passport could get him through the border.

But that won’t change Ahmed’s mind.

“Even if the ban is lifted for good or if they’re like ‘oh yeah, you’re Canadian, you can go,’ at the end of the day it’s clear that they don’t want me there,” he says.

“I know it’s not all Americans,” he adds. He’s seen plenty of people protesting against the ban and has felt their solidarity, but the damage has already been done. For this Iraqi journalist, who loves New York and the NBA, and who watches American movies and TV shows, going back to the United States – with or without the ban – is no longer an option. At least in the short run.

“I really don’t feel welcome. The country doesn’t want me there, and to be honest, unless things change drastically, I don’t want to be in the country anymore either.”

One thought on “THE IRAQI JOURNALIST”